What is Medicaid and what does it cover?

Medicaid is a way to get health care at a lower cost or sometimes at no cost to you. Medicaid typically covers children, pregnant women, elderly adults and people with disabilities and eligible low-income adults.

Medicaid is managed by each state, so the eligibility requirements can change from state to state. Your state may even have its own name for its Medicaid program. You can learn more by viewing frequently asked questions (FAQs) about Medicaid.

Find Medicaid plans near you

Enter your ZIP code to see available Medicaid plans in your area.

Do you have Medicaid and Medicare?

If you're eligible for both Medicaid and Medicare, check into UnitedHealthcare Dual Complete,® which is a Dual Special Needs Plan (D-SNP).

These plans are available in some states. D-SNP can help you get more benefits and features than you can with Original Medicare, at no extra cost.

Sign in for an easier way to see your plan information.

The basics of Medicaid

This video explains what Medicaid is and how it works. 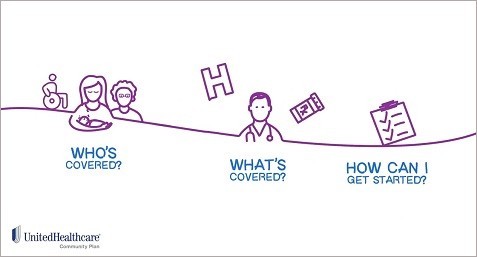 ANNOUNCER: So you have some questions about Medicaid? You're not alone. And you've come to the right place. Follow along.

The screen slides to the right where the hand continues drawing the purple line across the screen, beneath a cloud outlined in blue. Streaks of light blue shoot down from the cloud as a purple capitol building with a flag on top rises from the middle of the line. Purple text reading, "WHO'S COVERED?*" bounces up on the capitol building's right and settles on the curved line. Thick, purple underlines appear beneath the purple "WHO'S COVERED?" text in the top right corner of the screen next to blue text reading "WHAT'S COVERED?" and "HOW CAN I GET STARTED?"

ANNOUNCER: We'll cover the basics and have you on your way in no time. Medicaid is health insurance that you get from the government.

A variety of purple graphics of different groups of people with accompanying blue text pop up beneath the line.

ON SCREEN TEXT: MOMS AND BABIES

SOME ADULTS NOT COVERED BY ANOTHER TYPE OF PLAN

ON SCREEN TEXT: *THIS VARIES BY STATE.

ANNOUNCER: It's great coverage for people who may have low income or certain health conditions.

The rounded top of the capitol building expands, transforming into an umbrella spreading across all the people graphics. Blue text appears on the umbrella. Light blue streaks of rain continue falling over the umbrella.

ANNOUNCER: Eligibility can vary by income, household size, and citizenship status, depending on your state.

ANNOUNCER: So that's who may be covered. Now let's talk about what may be covered for low income individuals, families, and children.

The umbrella spins and flutters. Purple text appears on the upper section of the umbrella above a purple graphic of a doctor holding a clipboard in the umbrella's center. A bush outlined in green passes across the top of the screen, a blue bench across the bottom of the screen. Various blue graphics of hospital equipment pop up in blue circles around the doctor, on the open sections of the umbrella. As the doctor writes on the clipboard, light blue streaks flow out from the umbrella's center toward the surrounding blue graphics.

ANNOUNCER: Most Medicaid plans let you pick your own primary care provider, or PCP. Your PCP is the main health care professional that takes care of you.

The umbrella spins, and the blue graphics fly off, replaced by a blue graphic of a calendar and stethoscope in a blue circle on the left and blue graphics of a male figure and a female figure being inspected by magnifying glasses in blue circles on the right. Blue text appears below the graphics. A bush outlined in green passes across the bottom of the screen.

ON SCREEN TEXT: REGULAR CHECKUPS WITH YOUR PCP

ON SCREEN TEXT: RECOMMENDED MEDICAL TESTS BASED ON YOUR GENDER, AGE AND HEALTH

ANNOUNCER: Medicaid plans offer a lot of help to stay healthy. Your plan may offer preventive care services as well as cover for medications, most at little or no cost to you.

A smaller blue umbrella floats down behind the purple umbrella. Other umbrellas appear on and around the sidewalk. The umbrella pops open, revealing a blue graphic of a tooth and blue text. The other umbrellas pop open revealing graphics of a needle and syringe, an apple, an eye examination chart, and a pregnant woman, with accompanying blue text.

ON SCREEN TEXT: IMMUNIZATIONS FOR CHILDREN

ANNOUNCER: Depending on your plan, your Medicaid coverage may also include extra care and services.

The camera scrolls up to a purple path extending past a green bush and blue bench. The hand swipes across the screen, tracing a line into which the path merges. Purple trees and a blue cloud appear. Purple text pops up and settles on the line. The "HOW CAN I GET STARTED?" text in the upper right corner of the screen changes to purple, and purple underlines appear beneath it.

ON SCREEN TEXT: HOW CAN I GET STARTED?

ANNOUNCER: If you think you might be eligible for Medicaid and you'd like to get started, here's what you can do.

ANNOUNCER: First, learn the details about your state's Medicaid program. Medicaid varies from state to state. Some states even call it something other than Medicaid.

ANNOUNCER: So find your state's program online or visit an office in person.

ON SCREEN TEXT: 2 SIGN UP ONLINE OR BY PHONE OR IN PERSON

ANNOUNCER: If you're eligible, you can then sign up online, by phone, or in person.

Purple underlined text appears next to blue and purple graphics of an alarm clock, an hourglass, and a hand holding a ticking stopwatch.

ANNOUNCER: Keep in mind that once you join, many states will want you to sign up again.

ON SCREEN TEXT: REDETERMINATION OR RECERTIFICATION

ANNOUNCER: Some states call this process redetermination or recertification, which are just big words for "re-enroll."

The clock, hourglass, and stopwatch graphics disappear, replaced by a blue and purple graphic of a mailbox. A light blue bird flies in from the left side of the screen, the mailbox door opens, revealing a purple letter which slides out, the bird catches the letter and carries it off the right side of the screen.

ANNOUNCER: So it's a good idea to be on the lookout for instructions from your state on what you need to do to keep your coverage in place.

ANNOUNCER: Your health plan may also contact you when it's time to renew your coverage.

The text and graphics slide off-screen. The hand appears holding a blue marker and draws a straight blue line across the middle of the screen. The line transforms into a shelf. Three purple boxes, labeled "PLAN A," "PLAN B," and "PLAN C," fall onto the shelf, and blue text falls on-screen above the boxes.

ANNOUNCER: One last thing. When you sign up for Medicaid, you might be asked to choose a health plan.

The shelf slides to the right, leaving just PLAN A visible. Blue text slides out from behind it. The purple box puffs up and then bounces in place on the shelf.

ANNOUNCER: United Healthcare Community Plan is a Medicaid health plan. In fact, we're one of the largest. And chances are, we're in your state.

The original diagram of purple graphics and blue text slides down from the top of the screen, then slides off-screen, replaced by the numbers 1 and 2 in purple which float into a column in the middle of the screen. Purple circles appear around the numbers.

ON SCREEN TEXT: WHO'S COVERED?

ON SCREEN TEXT: HOW CAN I GET STARTED?

ANNOUNCER: And that's it. Now that we've gone over the basics, there are two easy things you can do if you'd like to learn more.

The numbers shrink and slide to the left, transforming into informational icons. A thick, purple line appears between them. Purple and blue text appear beside them. Then they slide off the bottom of the screen.

ON SCREEN TEXT: WHO'S COVERED AND HOW TO ENROLL

What to know about applying for Medicaid

It may seem like there's a lot to learn about applying for Medicaid. Here are a few important things to know as you get started.

CHIP is Medicaid for children

The Children's Health Insurance Program (CHIP) is an option for some families. CHIP gives low-cost coverage to children whose parents make too much money to qualify for Medicaid.

You may qualify for Medicaid now even if you didn't before

You apply for Medicaid through your state

Learn about Medicaid plans near you

Want to learn more about Medicaid?

Got more questions? Here's how to get more answers about Medicaid, like:

You can also look up Medicaid terms in our glossary to find out what they mean.