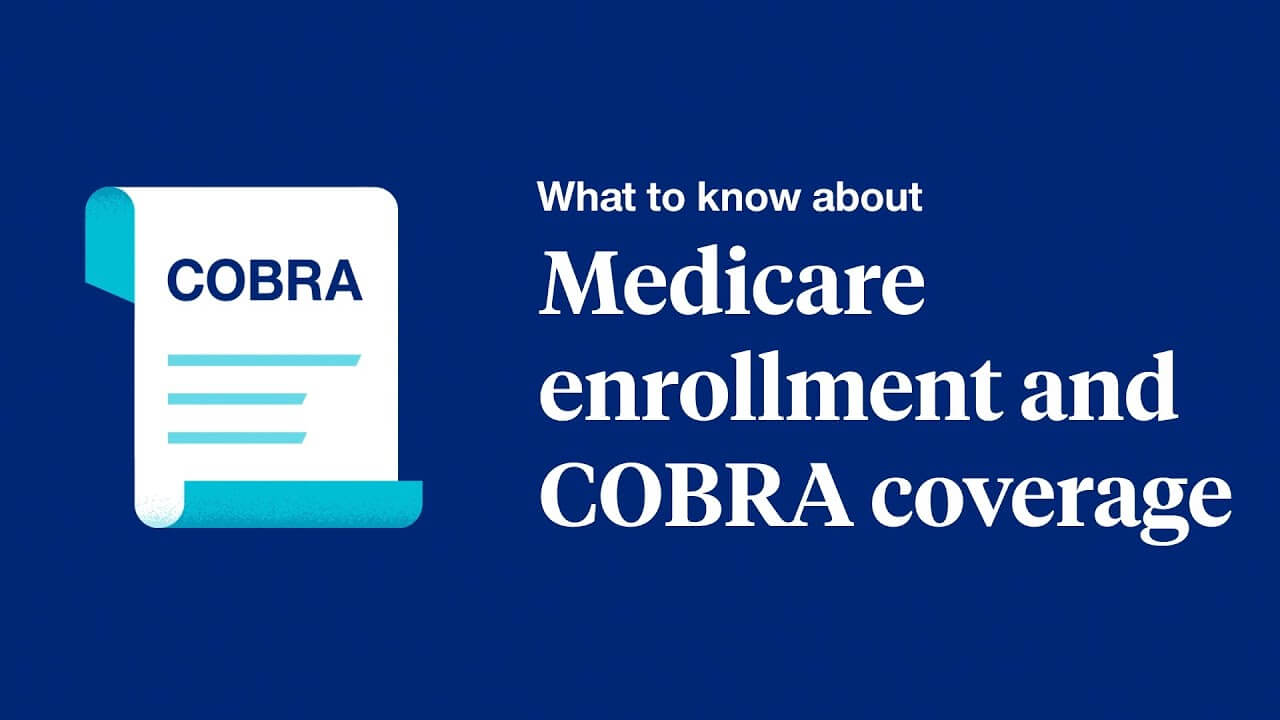 Upbeat music plays as the UnitedHealthcare logo becomes ribbons that swoop across the screen. A text bubble pops up.

ON SCREEN TEXT: Working past 65…

A document with the word COBBRA printed on the top appears.

ON SCREEN TEXT: What to know about Medicare enrollment and COBRA coverage

A bald man in glasses sits in a chair. Text appears in a blue banner at the bottom of the frame.

PHIL MOELLER: I’m Phil Moeller. Thanks for spending a few minutes with me today.

A sheet of paper appears over a blue background. The word “COBRA” is written on it. Text appears beside the paper.

ON SCREEN TEXT: How does COBRA work with Medicare?

Phil sits in his chair.

PHIL: So, in addition to sort of the basic pathways you have to choose, there are a couple of other situations I wanted to review that affect a lot of people based on the reader questions that I deal with.

A light blue background appears, and dark blue text appears at the top.

A sheet of paper with COBRA written on it, and a seal pops up underneath the text.

PHIL: The first one involves what’s called COBRA. COBRA is an acronym for a law that was passed in the 1980s that provides people guaranteed access to health insurance if they lose their employer insurance. It can be continued for up to 18 to 36 months, and for a lot of people COBRA is a great deal.

Text appears at the top of the frame over a light blue background.

PHIL: It really relieves a lot of stress if you happen to lose your job. You got a lot of worries about not having a job and one of them you don’t want to have in that group is whether or not you’re going to have health insurance. So COBRA allows you to continue your health insurance.

PHIL: However, for people who are nearing age 65, there’s a wrinkle in the COBRA rules that a lot of people don’t understand. And that is, if you’re on COBRA, and you turn 65 COBRA will cease providing primary insurance coverage to you and will become a secondary provider of insurance coverage.

The screen is split in two. On the left, a light blue background with a sheet of paper the reads Cobra appears. Text sits at the top.

On the right, a small ID card that reads MEDICARE sits against a dark blue background. White texts rests at the top.

The MEDICARE card and the COBRA sheet of paper swap sides. We return to Phil in his chair.

PHIL: A lot of people don’t know this and will assume that COBRA is gonna be their primary insurer. And because they have COBRA they further assume that they don’t need Medicare at 65, and they fail to enroll in Medicare. And in that situation, they could face a really unpleasant surprise if they have a big medical expense.

PHIL: And they file a claim, only to learn that COBRA is only gonna be secondary coverage, it’s not gonna provide primary coverage.

Over a white background, the exclamation mark appears, with dollar signs and gold coins appearing around it. We return to Phil in his chair.

PHIL: That can entail a big financial hit if you have a serious medical issue. So, I urge people to be aware of the fact that if you have COBRA and you are eligible for Medicare by virtue of turning 65, you have to get Medicare on a timely basis, because COBRA will no longer be your primary insurance provider.

A notepad appears over a dark blue background. A checkmark and text is written inside.

ON SCREEN TEXT: Sign up for Medicare, even if you are on COBRA

The notepad slides away and is replaced by a question mark along with white text.

ON SCREEN TEXT: What if I still have questions?

PHIL: I really appreciate you spending a little time with me today. I hope I’ve helped answer some of your Medicare questions. I realize you may have lots of other questions, Medicare can be pretty complicated. MedicareMadeClear.com provides lots of answers to your basic questions.

PHIL: So if you still have them, I urge you to go there and see if you can get the answers you need. Thanks again for spending time with me today.

ON SCREEN TEXT: Medicare Made Clear brought to you by UnitedHealthcare

Faint text sits at the bottom of the screen.

Medicare When An Employer Has 20 or More Employees

Medicare When An Employer Has Fewer Than 20 Employees

Medicare When Retiring at Age 65

ATTENTION: We no longer support Internet Explorer (IE) or certain versions of other browsers. Let's upgrade your browser to make sure you all functionality works as intended.