Medicare When an Employer Has Fewer Than 20 Employees

If you work for an employer with fewer than 20 employees, in most cases you have to enroll in Medicare when turning 65 even if you plan to keep working. Medicare expert Phil Moeller discusses this situation and some important things to keep in mind if you work for a small employer. 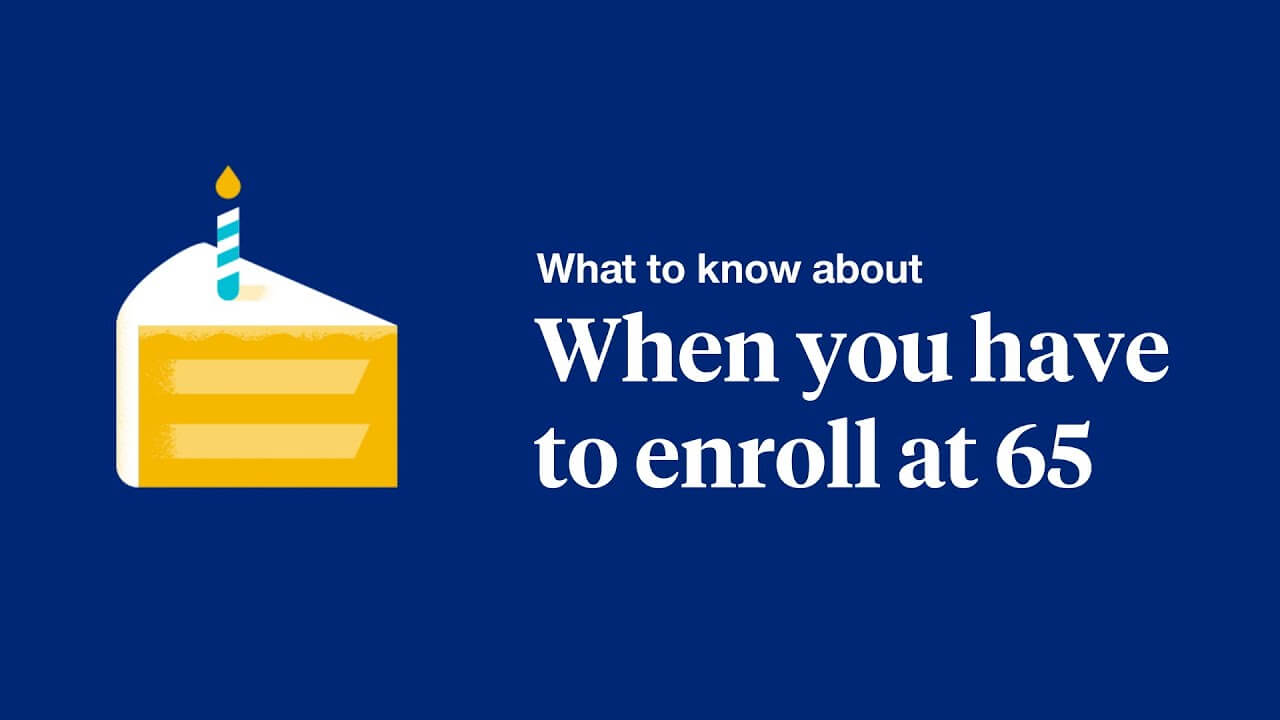 Upbeat music plays as the UnitedHealthcare logo becomes ribbons that swoop across the screen. A text bubble pops up.

ON SCREEN TEXT: Working past 65…

A slice of birthday cake with a lit candle appears.

ON SCREEN TEXT: What to know about When you have to enroll at 65

A bald man in glasses sits in a chair.

Text appears in a blue banner at the bottom of the frame.

PHIL: Hi, I'm Phil Mohler. I write articles and books about retirement and healthcare issues. And I've written a lot of pieces about Medicare.

A bar labelled “60-65” sits against a white background. A cake sits above the number 65, as a circle with two buildings moves along the bar.

PHIL: And among the questions I get asked, one of the most frequent questions is, what do I do when I'm approaching 65, I plan to continue to work. But I work for a small employer.

The encircles buildings move away from the bar, and text appears beside it.

ON SCREEN TEXT: Fewer than 20 employees

The cake returns to the bar and text appears above it.

PHIL: So I urge people to assume that this is a decision they need to make in a pretty timely basis.

A sheet of paper appears with the words “Employer plan” next to white text against a blue background.

ON SCREEN TEXT: Can I keep my employer plan?

PHIL: In most cases, when a person is about to turn 65, and they work for what I'll call a small employer with fewer than 20 people, they have to get Medicare.

The Employer Plan sheet sits on the left side of the screen underneath text.

On the right side of the screen, a card labelled MEDICARE sits underneath text.

PHIL: However, as you may know, Medicare doesn't cover everything. And so having that secondary employer coverage can be very important to you. How important? Well, it depends on your employer plan. And one of the pieces of work you need to do before you turn 65 is make sure you understand how your employer coverage will work. Once it's no longer primary, but secondary coverage.

A notepad with text slides up against a blue background.

ON SCREEN TEXT: Understand how your employer plan will work

PHIL: Some employer plans provide great secondary coverage, some not so great, you need to figure out which one applies to you.

A sheet of paper labelled “Retiree Coverage” appears on screen. Icons of an eye, toothbrush, a foot, and a magnifying glass appear above it, as well as text.

PHIL: In particular, a lot of so-called retiree plans will continue to provide pretty good secondary coverage. For things that Medicare doesn't fully pay for.

An icon of a pill bottle appears, as well as text.

PHIL: They may also provide pretty good drug coverage. And this is an important consideration because Medicare can cover all of those things as well. You need to understand what's going to be covered what's not going to be covered.

The Retiree coverage sheet slides to the left, and the MEDICARE card appears on the right.

PHIL: Once you know that, then you can approach the Medicare decision. Because getting Medicare course doesn't just mean one thing.

The Medicare card appears against a blue background, along with icons for many types of coverage, including drug, dental, eye care.

Text appears beside a full pill bottle against a blue background.

ON SCREEN TEXT: Do I need to get a Part D plan?

PHIL: It could be for example, that your employer plan does a really good job of picking up things that Medicare doesn't pay for.

The Employer Plan sheet appears on the left side of the screen. On the right, a bed labelled Part A and a Stethoscope labelled Part B appears.

PHIL: If that's the case, probably getting just Medicare A and B is okay for you

A pill bottle labelled Drug coverage is crossed out above the Employer plan. The pill bottle pops in on the right side of the screen next to a plus sign. It is labelled “Part D.”

A notepad with text appears.

ON SCREEN TEXT: Understand how your employer plan will work

Two pill bottles appear on the left side of the screen below text.

At the same time, two bottles appear on the right side also under text.

The two sides are connected by an equal sign.

PHIL: If you do get drug coverage through your employer, it has to be credible meaning has to be at least as good as a typical Part D plan. If so you're fine. If not, even though your company may offer secondary drug coverage, you probably still need to get a Part D plan.

Text appears against a blue background next to a long sheet of paper.

ON SCREEN TEXT: What options are there for Medicare coverage?

PHIL: While you can get parts A and B, you can get them in more than one way. So you could get traditional Medicare, which is A and B maybe a Part D plan. But you also get a Medicare Advantage plan.

The screen is split in two. On the left, three icons of a bed, a stethoscope, and a pill bottle are labelled Part A, Part B, and Part D. They appear under text.

On the right, all three icons are grouped together, and are labelled Part C. Text appears above them.

A blue circle expands across a white background and text appears inside.

PHIL: And that case, you get A and B usually with a Part D drug plan folded in. And you also get some supplemental coverages that aren't available with Original Medicare.

The frame is divided into four quadrants. The top left has gym bag labelled Gym memberships. The top right has glasses labelled Vision. The bottom left has a toothbrush labelled Dental. And the bottom right has an ear labelled Hearing.

PHIL: You can get gym memberships, you can get hearing, vision, dental coverage, these are all things you should pay attention to.

A sheet of paper labelled Example plan appears against a blue background. Text appears next to it, along with various gold coins.

PHIL: For example, there could be some plans that have look terrific on paper with low premiums but end up being very expensive if you use them. So how much health care you're going to use, and what's the best insurance plan to provide you the health care you need.

Three icons of a man, a woman, and a child appear next to white text.

ON SCREEN TEXT: What about my family?

The three icons appear under text.

PHIL: You also need to pay attention your family. In most cases, your spouse or your children, if they're covered on your employer plan will continue to be covered on your plan, even though you get Medicare.

The icon of the man moves to the left side of the screen and is segmented off from the other. Text appears above him.

PHIL: But you need to find this out and make sure that they're not any unpleasant surprises for you. This is especially the case if you decide you may want to just drop your employer plan. It could be in some cases, just Medicare itself is fine.

The Medicare coverage side takes up the whole frame.

PHIL: That's going to depend on the kind of coverage your employer plan provides and also on how much you pay in that premium. Does the premium drop when the plan moves from primary to secondary? These are things you got to pay attention to. And again, if you were to drop that plan, how would you insure your spouse and your kids? Those are very important considerations.

The employer plan sheet appears with two coins on the left side of the screen under text.

It moves to the right side of the screen under new text.

Text appears next to a magnifying glass.

ON SCREEN TEXT: Where do I get this information?

Two icons of a man and a woman with a headset appear, talking to each other.

Text appears next to a clipboard.

ON SCREEN TEXT: So, what is the takeaway?

PHIL: So, I know we've covered a lot of ground today. I want to make sure you pay attention to what is your secondary coverage is like? What kind of Medicare plans do you want? How are you dealing with your Part D drug plan? And is your family taken care of? Which you always want to make sure you do.

A notepad appears with a checklist of items.

Text appears next to a question mark.

ON SCREEN TEXT: What if I still have questions?

PHIL: I hope this has been helpful to you. If you have any more questions, feel free to go to Medicare made clear dot com.

PHIL: I’m Phil Moeller, and it’s been a pleasure spending some time with you.

ON SCREEN TEXT: Medicare Made Clear brought to you by UnitedHealthcare

Faint text sits at the bottom of the screen.

Medicare When An Employer Has 20 or More Employees

Medicare When Retiring at Age 65

ATTENTION: We no longer support Internet Explorer (IE) or certain versions of other browsers. Let's upgrade your browser to make sure you all functionality works as intended.