When can you start getting Medicare?

Published by Medicare Made Clear®

A somewhat cynical old saying declares that only two things in life are guaranteed: death and taxes. But there’s also something positive you can count on, and that’s Medicare.

Medicare is a federal health insurance program that U.S. citizens and qualified legal residents are guaranteed access to once they reach eligibility. (To qualify as a legal resident, you must have lived in the U.S. for at least five years in a row leading up to your eligibility date.)

At what age can you get Medicare?

You are eligible for Medicare when you turn 65. You may be working, not working or retired. You may or may not be receiving Social Security or other retirement benefits. As far as Medicare eligibility goes, your age is what matters.

Key word – your. Medicare is individual insurance. It’s your age that counts, not your spouse’s, even if you are both covered by the same employer insurance when one of you turns 65.

When can you enroll in Medicare for the first time? 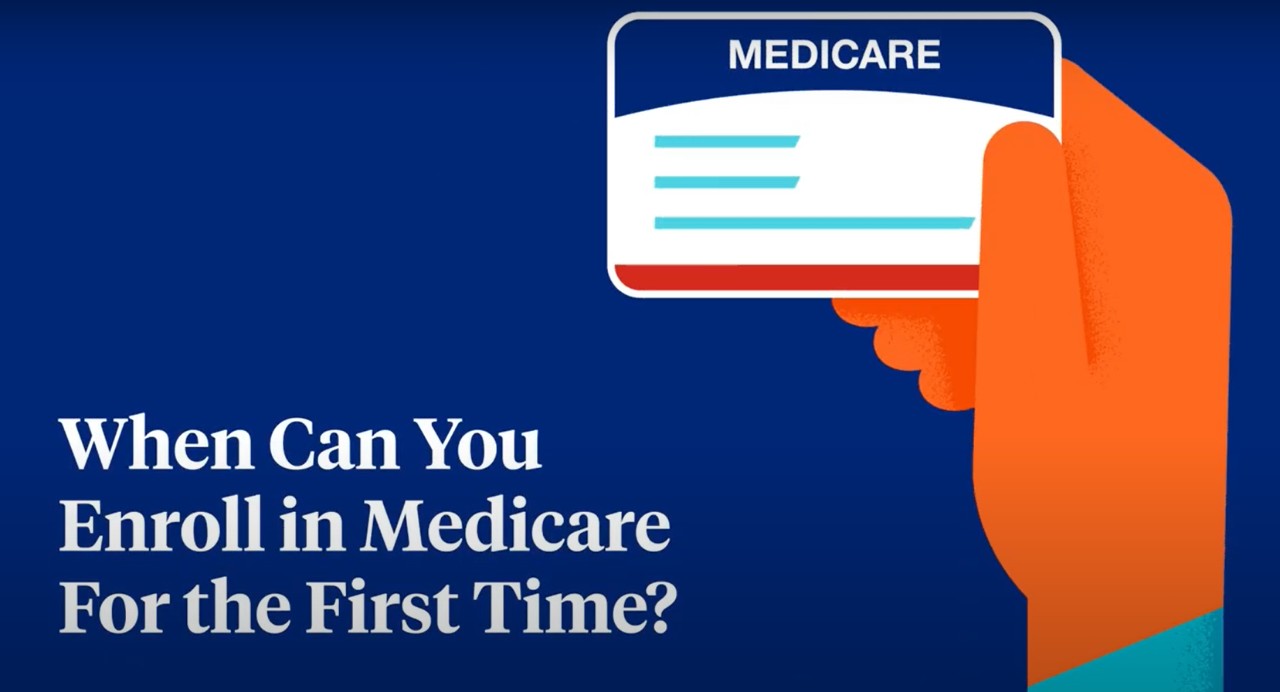 Upbeat music plays. An illustrated hand holding a Medicare card reaches into view against a blue background. Text appears beside it as a narrator speaks in voiceover.

ONSCREEN TEXT:     When Can You

For the First Time?

NARRATOR: There are certain Medicare periods when you can enroll for the first time.

Seven calendars appear arranged in a row. The middle calendar has a picture of a birthday cake.

NARRATOR: Your first opportunity to enroll in Medicare is during the initial enrollment period. Dates vary by person, but the period lasts seven months for most. It begins three months before the month of your sixty-fifth birthday, and ends three months after.

NARRATOR: During this time, you in Medicare Part A, Part B, Part C, and Part D.

Three calendars appear in a row.

To enroll in Medicare Parts A & B

NARRATOR: If you miss your initial enrollment, your next opportunity to enroll in Medicare is during the general enrollment period, which begins January first and ends March thirty-first for Medicare Part A, and Part B.

Icons of a briefcase and a sheet of paper that reads, “Employer coverage” appear.

NARRATOR: Lastly, if you qualified to delay Medicare because you had creditable employer coverage, a special enrollment period exists where you can enroll in Medicare for the first time.

NARRATOR: This period lasts eight months and begins after you leave work or lose the employer coverage.

NARRATOR: During this time, you can enroll in Medicare Part A and Part B.

ONSCREEN TEXT:     Be careful, you only have 2 months to get:

NARRATOR: But be careful. You’ll only have two months to enroll in a Medicare Advantage Part C plan, or a Medicare Part D prescription drug plan without penalty.

brought to you by UnitedHealthcare

A swirl of blue ribbons turn into the stacked blue U’s of the UnitedHealthcare logo, then fade to text.

Signing up for Medicare at age 65

If you are receiving Social Security or Railroad Retirement Board benefits, you’ll be enrolled in Medicare automatically when you turn 65. You’ll get your Medicare card in the mail.

About Medicare Made Clear

Medicare Made Clear brought to you by UnitedHealthcare provides Medicare education so you can make informed decisions about your health and Medicare coverage.

Boost your Medicare know-how with the reliable, up-to-date news and information delivered to your inbox every month.

Enter your ZIP code for plans in your area